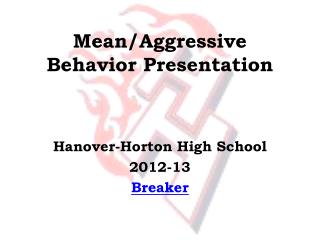 Mean/Aggressive Behavior Presentation. Hanover-Horton High School 2012-13 Breaker. Table Task. At your table and as a group, develop a list of the most common forms of immature/inappropriate behavior that you see in a typical day Attitude-Behavior Consistency - . psychology of attitudes (psy320). outline. 1. the principle of aggregation  2. the

Behavioral Ecology - . study of how behavior is controlled, evolves, and enhances survival and reproductive success of

From Soup to Nuts: If It’s About Behavior, APA Has IT - . presented by anne breitenbach, trainer, psycinfo. a little