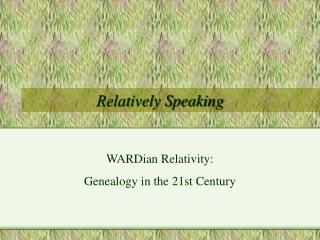 Relatively Speaking . WARDian Relativity: Genealogy in the 21st Century. What is Genealogy?. Genealogy is ‘the history of the descent of a family’ It’s about collecting and preserving family history. Why is genealogy interesting?.

Speaking to Persuade - . 16. persuasion. the process of creating, reinforcing, or changing people's beliefs or

Persuasive Speaking - . reflection (name, lab #, instructor). what is one thing you learned from the content of the