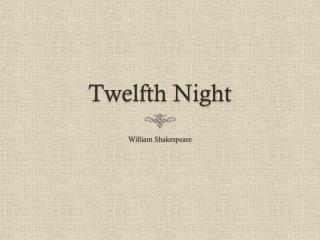 Twelfth Night . William Shakespeare. Iambic Pentameter. Iambic refers to the stressed and unstressed syllables in a line of poetry – in this case, it creates the rhythm of da DUM (unstressed to stressed) Pentameter means that there are 5 ( penta ) of these da DUMs per line

A Midsummer Night’s Dream by William Shakespeare - . top 10 reasons why you should read it…. shakespearean insults

Twelfth Night - . night. a midsummer night’s dream twelfth night. the origin of love. the movie (hedwig) the origin of

Twelfth Night - . an introduction. setting. set in a region called illyria (around the eastern coast of the adriatic sea

Twelfth Night , (or What You Will) A comedy by William Shakespeare - . “ love sought is good, but giv'n unsought is

Shakespeare’s language - . “if music be the food of love, play on.” – shakespeare, twelfth night. shakespeare or

TWELFTH NIGHT or What You Will - . bevington , chapter 10. the melancholy comedy. written, 1601 and performed by law

Twelfth Night - . characters, structure, and themes. title “what you will” is like “as you like it” does it mean