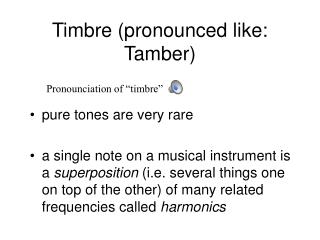 Timbre (pronounced like: Tamber). pure tones are very rare a single note on a musical instrument is a superposition (i.e. several things one on top of the other) of many related frequencies called harmonics. Pronounciation of “timbre”. Timbre.

The Elements of Music - Understanding of music. the elements of music.

Kwakiutl pronounced &quot; kwah-kee-oo-tl ” - . from the picture, make some guesses about their culture!. h umans

Timbre - . what is timbre??. the quality of a musical note or sound or tone that distinguishes different types of sound

A brief message from your TAs - . tine gulbrandsen wahab hanif. pure tones are very rare in nature!. what are real sounds

Humanities – Music - . the elements of music. learning targets. i can define and give examples of melody. i can define

Timbre - . a description of the actual sounds that you hear. “tone color” or “quality”. timbre. timbre can be a

SENSATION &amp; PERCEPTION - . chapters 4 &amp; 5 ap psychology. sensation. how do we take in information?. a

Limerick Flying Club - . ppl air law 4. question 1. if radio communication is established during an interception but

Paul Klee - . seeing below the surface. paul klee: fish facts. 1. his name is pronounced paul “clay.” 2. he was born