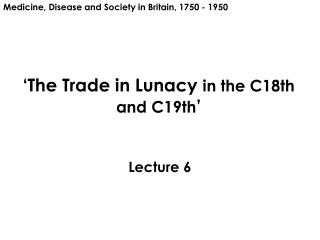 Medicine, Disease and Society in Britain, 1750 - 1950. ‘The Trade in Lunacy in the C18th and C19th ’. Lecture 6. Lecture Themes and Outline. Increased Institutionalisation – why? Confinement vs Care The emerging ‘trade in lunacy’ in the eighteenth century