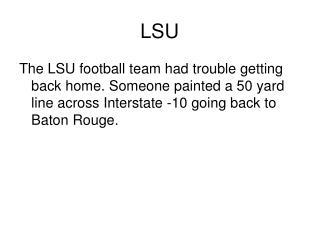 LSU . The LSU football team had trouble getting back home. Someone painted a 50 yard line across Interstate -10 going back to Baton Rouge. . The budget- simple yet elegant LSU Dining - . by: randa whitaker. focus for project. beginning of semester: 459 commons the 5 the union. end of

LSU HURRICANE CENTER - . use of its and other remote data acquisition systems for hurricane evacuation. brian wolshon