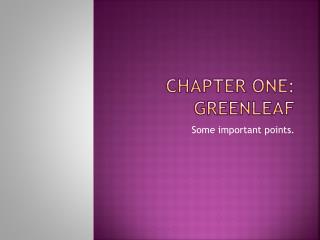 Chapter One: Greenleaf. Some important points. Greenleaf, p. 23. But if one is servant, either leader or follower, one is always searching, listening, expecting that a better wheel for these times is in the making.

Chapter 26 of CLSR - Bipartite matching by dr. m. sakalli, sources: levitin and many other cse, marmara univ. may/2009.

John Greenleaf Whittier - . by: heath ledford. beginnings of his life. born into a quaker farming family. guess where he

Servant Leadership - . samantha onnen htm 491. what is this about…. “it begins with the natural feeling that one

Seven Pillars of Servant Leadership Model: Leading by Serving, Serving First - . who is the SERVANT-LEADER - . “the servant-leader is servant first. it begins with the natural feeling that one wants to