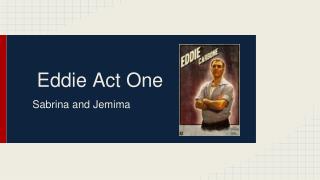 Eddie Act One. Sabrina and Jemima. Feels superior to italian immigrants. “You’re saving their lives, what’re you worryin’ about the tablecloth? They probably didn’t see a tablecloth in their whole life where they come from” pg. 6 An artist performs in the Waterwall show in Lisbon 里斯本的表演藝術 - . world diary 130104 地球日誌 by eddie

A view from a Bridge Key Themes - . by jamie salt. the relationship between eddie and