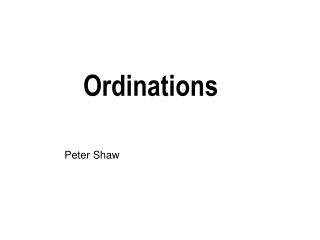 Ordinations. Peter Shaw. Introduction to ordination. “Ordination” is the term used to arrange multivariate data in a rational order, usually into a 2D space (ie a diagram on paper). Holy Orders - . …..the real “men in black”. holy orders:. the sacrament through which a man is made a bishop,

Imagining New Ways of Being Catholic: The Underground Church - . by kathleen kautzer, ph.d. associate professor of

Maritime Transmission of the Monastic Order of Nuns to China - . guang xing centre of buddhist studies the university of

Air Traffic Management - . french fua the principles of the flexible use of airspace. outlines. military and civil air

Pt ShriRam Sharma Acharya (1911-1990) - . a visionary a father a soldier a fighter a revolutionist a writer a leader an

DIRECT ORDINATION - . what kind of biological questions can we answer? how can we do it in canoco 4.5?. our questions are