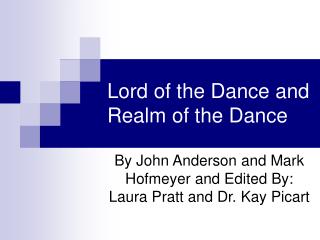 Lord of the Dance and Realm of the Dance. By John Anderson and Mark Hofmeyer and Edited By: Laura Pratt and Dr. Kay Picart. Shiva, the great Hindu god of destruction. Worshipped in ____ Classically represented as Nataraja, Lord of the Dance. The basic vehicle of dance is the human body. Dollhouse - The astolat castle is a 29-room dollhouse, which is nine feet tall, measuring 800 pounds and worth $8.5 Heartfulness eMagazine November 2015 - Welcome to heartfulness magazine, a monthly emagazine in which we explore

Are you dancing? - . 井岸二小 余叶嫦. this is a park. what are they doing?. the baby is sleeping. the girl is

Dance Quiz - . dance terms 1. adding new movement or movements to a phrase is the name of what choreographic device?.

Dance - . part of the arts &amp; humanities core content. altered for use with 5 th grade students at perryville

Dance Movement Therapist - . dance movement therapists use movement and dance within a therapeutic environment to help

DANCE - . dance. dance is the most universal human activity found in every culture focuses on the human form in time and

PURITANISM AND THE ENLIGHTENMENT - . essential questions . what were the essential features of puritanism? what factors

Bless Me Ultima - . rudolfo anaya. activating strategy. what are some places you lived/visited in (cities, states,

Dance - . betka Ďurčová. what is dance ? . dance is an art form that generally refers to movement of the body, usually