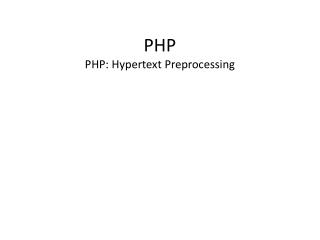 PHP PHP: Hypertext Preprocessing. What is PHP?. PHP is a server-side scripting language designed specifically for the Web. An open source language PHP code can be embedded within an HTML page, which will be executed each time that page is visited. Example code (all equivalent): Introduction to HTML5 - . introductions. lecture is based on the book: the essential guide to html5: using games to learn

Hypertext (1) - . historically, text is sequential: read from beginning to end hypertext is non-sequential, with internal