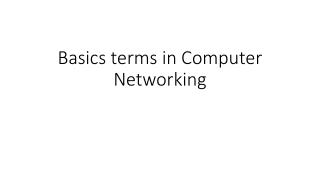 Computer Networking - . bits and bytes. putting information into a form that a computer can deal with… “a” =