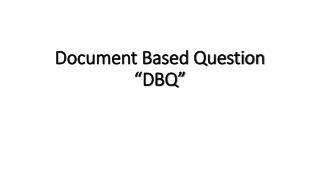 Document Based Question “DBQ”. It’s a question that is answered by analyzing several documents. USE ALL of the documents. COMMENT on the “POV” (point of view), type of document, date, etc. GROUP documents several ways: By date

Introduction to SAX: a standard interface for event-based XML parsing - . cheng-chia chen. what is an event-based

Thank you for joining us. Today’s training focuses on the ITRC Technical and Regulatory Guidance Document entitled:

Examining the ATM Requirements Document - . a requirements document specifies the overall purpose of a system and what it