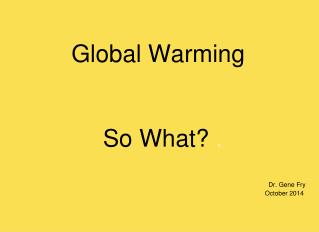 Global Warming. So What? . Dr. Gene Fry . October 2014. Climate Changes without Humans. Climate has been changing for hundreds of millions of years (MY). Mostly, it ’ s been much warmer, with much higher CO 2 levels. Global Warming - . believe it or not!. actually 31,000 scientists have organised themselves in protest against this

Anthropogenic Global Warming - . is earth at the tipping point? by: geoffrey pohanka updated 5/13. objectives. examine in

Global Warming - . by saima sohail the city school darakhshan campus. what is global warming?. the changes in the surface