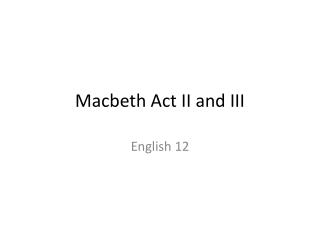 Characters - . duncan. king of scotland good guy liked by his people too trusting – has blind faith. macbeth. thane of

MACBETH - . words for study. fair/foul. “fair is foul and foul is fair” “so foul and fair a day i have not

Macbeth Terminology - . terminology. as we read various scenes and sections of the play, you will need to look out for

THE ART AND THE SCIENCE Of caring for COMPlicated Grief - . aprof judith murray the university of qld 3 august 2012.

THE ABUSE OF POWER IN MACBETH - Macbeth's constant indecision. macbeth is constantly changing his mind.he gets confused

LECTURE 9 : EMPRICIAL EVIDENCE : CAPM AND APT - . (asset pricing and portfolio theory). contents. how can the capm be