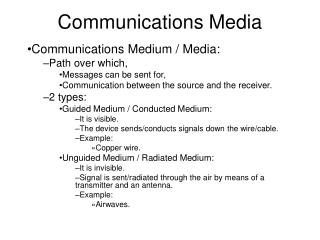 Social Media and Communications - . keeping it classy in the modern workplace. written by dallas duncan and dr. frank b.

HOSPITAL COMMUNICATIONS MEDIA - . i ntroduction. we are a full service advertising company in india. our excellence is to

Media Relations Working with the Media and Staying on Message Presented by: CD&amp;M Communications - . january 20,

Social Media in emergency situations - . this too can be prepared for. pascale paulin , communications specialist .