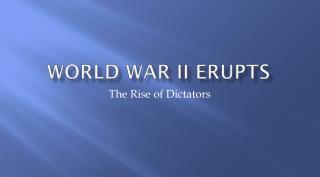 World war ii erupts. The Rise of Dictators. European Dictators. Adolf hitler. Benito mussolini. How did the aftermath of World War I contribute to political problems in Europe?. The war had left the European economy in ruins – farms, factories, roads destroyed

The Civil War - . a house divided us history - gardner. war erupts how was the civil war a: legal issue moral issue

Territories - . -hawaii american planters had organized the overthrow of the monarchy -philippines war erupts over

Volcanoes - . by: noah and mercedes. how volcanoes form and how they occur. volcanoes are formed when plates under the

World War II Erupts - . 23.1 the rise of dictators. review. how did wwi begin in europe? who made up the triple alliance?

What causes a volcano to erupt? - . a volcano erupts when magma escapes from inside the earth. as the magma is escaping