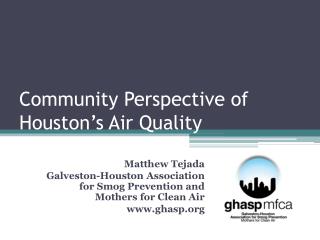 Community Perspective of Houston’s Air Quality. Matthew Tejada Galveston-Houston Association for Smog Prevention and Mothers for Clean Air www.ghasp.org. What we know Houston can be. How a lot of others see Houston. When I moved to Houston….

The New Perspective on Paul: Evaluation and Critique - . what is the new perspective? history of the npp: the writers and

Indoor Air Quality and the School Environment - . ensuring our children’s health and academic success. provided by the