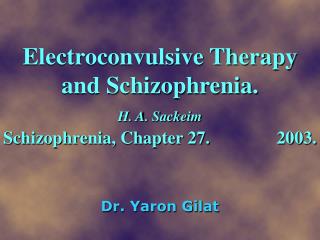 Electroconvulsive Therapy and Schizophrenia. H. A. Sackeim Schizophrenia, Chapter 27. 2003. Dr. Yaron Gilat. History. Hippocrates was the first to observe that malaria-induced convulsions in insane patients was able to bring a reduction in their symptoms.

Electroconvulsive Therapy (ECT) - . ect. first used: in the 1930’s (under the name electroshock) used for : mostly for

Dopamine and schizophrenia - . tea talk, 15/1/15. “... a psychiatric disorder, falling within the scope of psychotic

Schizophrenia and Psychosis - Brief psychotic disorder. mental disturbance involving one of the following

Schizophrenia and dementias - . do now. word dump write down all words (preconceptions) about “schizophrenia” that