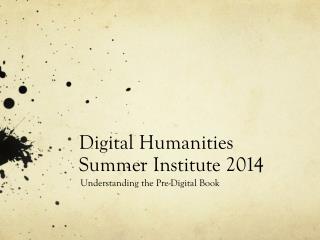 The Digital Humanities: From the Edge to the Center - . goals tools and projects getting started ------------- learning

The National Endowment for the Humanities (NEH) - . presented by mary huffman for the 2010 oklahoma state board of

Welcome to the Singapore and Thailand Summer School - . students from nus high school of math and science (sg) mr.

Why are medievalists early adopters of information technology, and what can others learn from them? - . margot