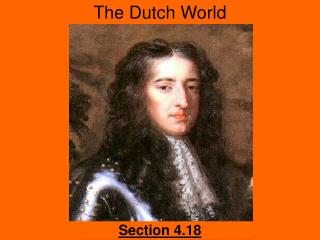 The Dutch World. Section 4.18. Questions to Consider. Describe Dutch cultural and commercial accomplishments in the 17 th century. How do the paintings of Rembrandt, Vermeer, and Moreelse illustrate Dutch artistic achievements and Dutch intellectual, commercial and colonial enterprises?

SPORTS IN HOLLAND - . football. sports are an important part of life for many dutch people. the most popular sports are

The Language Portal Dutch / Frisian - . what is the language portal?. a place on the internet where all knowledge about

Double Dutch - . vocabulary northwood 5 th grade. unison. noun process in which all elements behave in the same way at

The Dutch and Japan Sharlyn Scott - . “ the red haired barbarians” in japan. the dutch factory in hirado. 1669