Unit 8: the Bystanders and the Rescuers - PowerPoint PPT Presentation 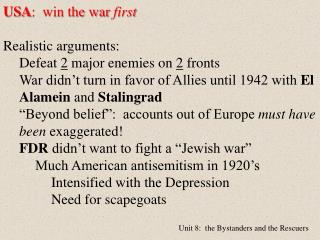 Unit 8: the Bystanders and the Rescuers

1 / 21
Download Presentation
Unit 8: the Bystanders and the Rescuers
76 Views

USA : win the war first Realistic arguments: Defeat 2 major enemies on 2 fronts War didn’t turn in favor of Allies until 1942 with El Alamein and Stalingrad “Beyond belief”: accounts out of Europe must have been exaggerated! FDR didn’t want to fight a “Jewish war”

Unit 8: the Bystanders and the Rescuers

Research Paper and Project - . 8a 2010. “those who cannot learn from history are doomed to repeat it.” - george

Holocaust Notes - . definition of jew (according to nazi party).   an individual with three or more jewish grandparents

US &amp; USSR From Allies to Enemies - . from “iron curtain” speech to truman doctrine . winston churchill

Why is PulsePoint Needed? - The pulsepoint app is a revolutionary pre-arrival solution designed to support public safety

RESPONDING TO A MEDICAL EMERGENCY - . coach jacobs edited by jake. cpr . cpr alone saves only about 5 %; cpr used with a

The Holocaust WebQuest - . introduction the task the process resources conclusion.

The Banality of Courage: Stories of ordinary people who risked their lives to save others in the midst of evil

Scene Size-up - Chapter 8. scene size-up. case history. you are dispatched to a report of a male shot in the chest. the

THE POISONED OR OVERDOSED PATIENT - . poisonings and drug overdoses can cause quick physical and mental changes in a

Bystanders during the Holocaust - . swbat: explain how everyday people and even national governments could be seen as