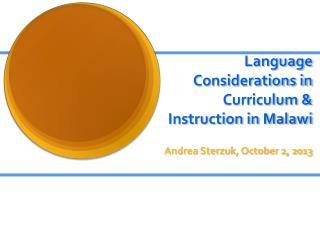 Language Considerations in Curriculum & Instruction in Malawi. Andrea Sterzuk , October 2, 2013. Macro Micro. If we want to understand English vocabulary development in a Math classroom in Malawi, we need to place it socially, historically and politically. Prevention of malaria in pregnancy in Malawi - . a successful collaboration between malaria control and reproductive

Powerful EL instruction and curriculum for preschool, kindergarten and transitional K - . findings and implications from

EDUC 616 CURRICULUM DESIGN AND INSTRUCTION - . week 6. media literacy. unless otherwise cited the content from this

Welcome to “Integrating the Curriculum” - . essential questions. what is your definition of co-teaching? using your