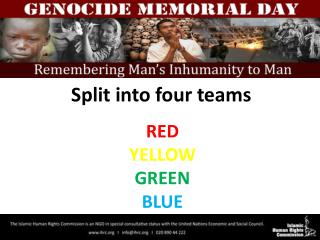 THE CRYSTAL MAZE - . get into teams of 4. the crystal maze is split into four zones based on four ancient cultures that

Taboo - . a thinking game. step 1. you will be placed in a group of four people each group is in competition with the

Taboo Plenary - Rules - . you will be split into two teams one member from each of your teams needs to sit at the front

TEAMWORK - . the role of teams in engineering, the aspects of group work and development as experienced by our team last

Team Four - Email netiquette be nice! remember your manners! cyber predators be careful of who you talk to! not everyone

Fractions: Wholes being split into equal parts - In this lesson you are going to learn how to solve word problems

Coin Toss - . not more than four team members in game uniform from each team may be present all other team personnel

Team:___________ - . hmpa. kevlar. kevlar is a synthetic material being utilized in numerous applications. of particular

Rules of Play Each team will send a representative to the hot seat for four consecutive questions, and rotate - There

The President and Vice-President roles will be split into two, so that the roles are shared between. - The president is

Information for new teams - . history. the potters bar &amp; district crib league was set up in 1983 to provide

Understanding Groups and Teams - . chapter 15. l e a r n i n g o u t l i n e follow this learning outline as you read and