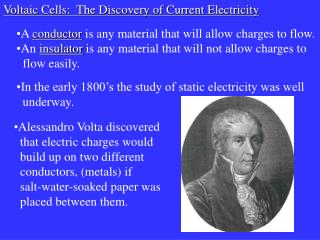 Voltaic Cells: The Discovery of Current Electricity. Alessandro Volta discovered that electric charges would build up on two different conductors, (metals) if salt-water-soaked paper was placed between them. A conductor is any material that will allow charges to flow.

CHAPTER 6 - . electricity. do you remember that …. electrons and protons have electric charges . electrons = have

Atomic Structure - . how do we know that atoms exist?. thought experiment. what’s the smallest possible piece that is

ENGR 3210 Fundamentals of Logistics Engineering - 2. development of transportation rates. most rates are available on web

CONDUCTORS - . conductor: charges free to move within the material. electrostatic equilibrium: there is no net motion of