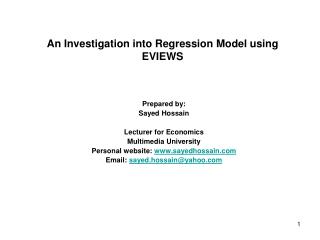 Statistical Models in S - . the template is a multiple linear regression model: in matrix terms this would be written

Introduction to Contact Investigation Process - . learning objectives. after this session, participants will be able to

Logistic Regression using STATA - . in this stata lab session we will explore the following • how we invoke logistic

EViews Training - . samples. note: the workfiles and data for examples for this tutorial are: data: data.xls results: