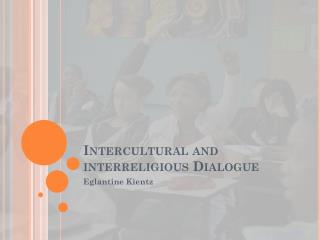 Intercultural and interreligious Dialogue. E glantine Kientz. Introduction. My project consists of a set of 10 classes intended for high school students in France. The students are around 15 (Grade 10). I am still working on them and I will add more details for the final report.

Intercultural Communication - . chapter 9 the effects of code usage on intercultural