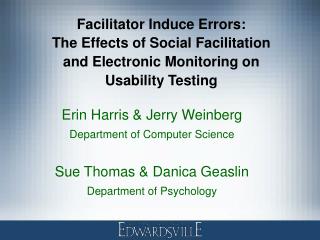 Study Monitoring: What Does It Mean &amp; How To Do It Right - . partners human research quality improvement program

Social Facilitation &amp; Audience Effects - . lesson objectives: by the end of the lesson you will be able to:

Scientific Underpinnings of Usability Engineering - . intro usability week 4. objectives. after this class you will be

Testing and Debugging - . programming tools and environments. debugging and testing. testing: “running a program with