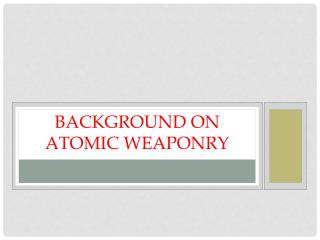 Background on Atomic Weaponry. What is an atom bomb?.

Arms Race - . by: dre’ anderson and tanner sinclair. background. in 1946, after wwii, the atomic energy act was passed

Background Hiroshima and Nagasaki (1945) The Acheson-Lilienthal Report (1946) - Who will / should have the bomb?: nuclear

The Atomic Bomb &amp; Nuclear Technology - . how did the development of the atomic bomb and nuclear technology change

Hydrogen bomb - . by: dj ayotte and ryan blanchard. making of the bomb. it is named for its two chief contributors,

Introduction, Background and Potential of Biological Weapons - . part 1 of 13 comments and contributions are encouraged:

The Arms Race - . numerous people feared that the thoughts were the more nuclear weapons a country had the more power

Dropping the Atomic Bomb - . swbat: compare and contrast reasons for dropping (or not dropping) the atomic bomb.

Proliferation of Nuclear Weapons and Their Threat to World Peace - . by: bryson applegate may 23, 2011 world history 2

Nuclear Weapons - . 5113. number of operational warheads in the u.s. nuclear stockpile, according to the pentagon. the