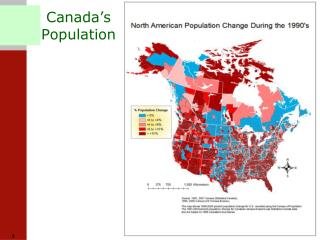 Path To Confederation - . act of union 1840. united upper and lower canada under one government they became known as east

Genocide in Canada? - . prior to european contact aboriginal people occupied every region of canada. their total

Cultural Geography - . of the united states and canada. immigration – the movement of people into one country from

World War II Canada’s Role - . introduction. canada’s population was 11.5 million in 1939 one in ten canadians would