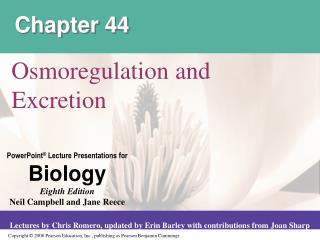 Chapter 44: Rights and Responsibilities in the Workplace - . may 30, 2006. looking for a job. interviewing be prepared!

Chapter 44 - . osmoregulation and excretion. overview: a balancing act. physiological systems of animals operate in a

Chapter 44: Creation and Termination of Partnerships - . definition. a partnership is a relationship: created by the

Chapter 44 Real Property - . learning objectives. what can a person who holds property in fee simple do with the

Ezekiel Chapter 44 - . theme: description of the millennial temple. outline of ezekiel. 1-3 the call of the prophet

Chapter 44 - . urinalysis. characteristics of the urine. color pale yellow to amber urochrome pigment from the

Chapter 44: Segregation in the Post-World War II Period - . how did segregation affect american life in the postwar

Chapter 44 - . human reproduction. reproductive systems. many similarities between species most similar within order

Chapter 44 - . care of patients with problems of the central nervous system: the brain. headaches. migraine headache —

Chapter 44 - . osmoregulation and excretion. osmosis . over time the rates of water uptake and loss must balance.