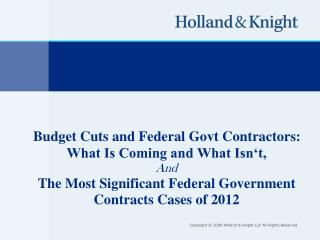 Budget Cuts and Federal Govt Contractors:  What Is Coming and What Isn‘t, And The Most Significant Federal Government Contracts Cases of 2012. SEQUESTRATION BACKGROUND. Budget Control Act of 2011