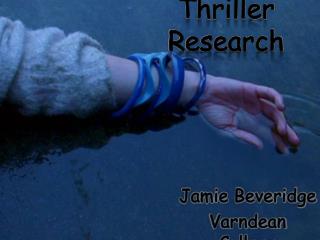 Drishyam’ Is The Thriller You Have Been Waiting For, Says Vaikundarajan - The ajay devgn, tabu and shriya saran starrer

Action Thriller, Baby To Be Released This Weekend Says Vaiku - Baby is a action thriller movie which is releasing on 23rd

The Thriller Genre - . genre. genre is a french word that means ‘type’ genre is a theoretical term for the

Film Analysis : Looking at Cinematic Technique - . the main questions you should be asking when watching a film: what,

The thriller genre - . genre. genre is a concept of which is defined as a term for any category of literature, whether it

Theme - . a broad idea, message, or moral of a story. the message may be about life, society, or human nature. themes

Narratives - . a piece of writing that tells a story. a narrative can be fiction or non-fiction (imagined or

Codes and Conventions of Thrillers - . jack, josh and liam . characters. people with dark history's or backgrounds who

Codes and Conventions of Thrillers