We Believe in God: The Father - PowerPoint PPT Presentation 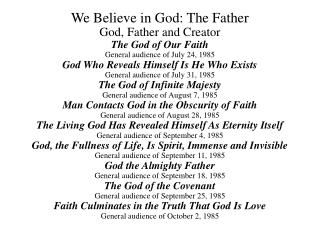 We Believe in God: The Father

1 / 95
We Believe in God: The Father
126 Views
Download Presentation We Believe in God: The Father

The Apostles' Creed - I believe in god, the father almighty, the creator of heaven and earth, and in jesus christ, his

WE Believe - . in this time of desperation when all we know is doubt and fear there is only one foundation we believe, we

THE APOSTLES’ CREED - . catholics believe that the word of god is found not only in the bible but also in the spoken

The Nicene Creed - . what is the nicene creed for orthodox christians? created by dr. maria

I BELIEVE IN GOD THE FATHER ALMIGHTY CREATOR OF HEAVEN AND EARTH … (The Apostles ’ Creed) - . i believe in one god,

God the Father - . the godhead—part 2. the distinct person of the father. the father is referred to as a person,

welcome - . holy trinity 26 th may, 2013. service with communion simplified spoken form. this service is a revision of

The Creed - . a creed is a statement of beliefs, from the latin, credo, or “i believe”. “i believe in god, the

The Nicene Creed - . we believe in one god,. the father, the almighty,. maker of heaven and earth,. of all that is, seen

The Faith We Believe : Unpacking the Creed - . prepared by david dayler, discipleship and parish life office, and anne

Does What We Believe - 1 thessalonians 1:1-10 . does what we believe. make a difference. in our daily lives?. does it

The Apostles’ Creed I believe in God, the Father Almighty,  the Creator of heaven and earth, -   and in jesus