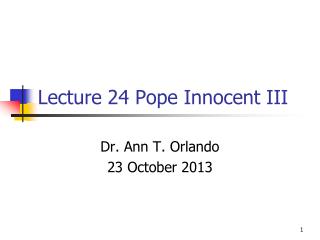 Pope Innocent III, On the Misery of the Human Condition, c. 1200

Pope Paul III (1534-1549) - . during this time, the major revival/reform movements in the catholic church came under

INNOCENT - . define:not guilty of a crime or offense sentence:staceysaid she was innocent but i knew she was guilty

Lecture III - . all that goes up comes crashing down do you want to grow? then give it a big push. money and the real

Lecture III - . 5. the balitsky-kovchegov equation. properties of the bk equation. the basic equation of the color glass