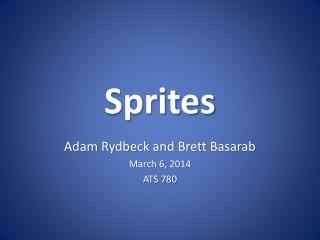 Texture Packer - . a texture’s width or height is always a power of 2 for example, the texture’s dimensions could be

CS 1372 - . sprites. recall…. atari computers and video games used the concept of players and missiles. built in to the

Scratch Animated Greeting Cards Level 2 - . what you ’ ll learn…. the history of the greeting card current trends in

Sprites. - Sprites. a sprite is an object that controls when, where, and how cast members appear in a macromedia director

Interactive Media and Game Development - . tiles, sprites and concept art. tiles. a tile is a small, square 2d image for

CSS Sprites - . dawn pedersen art institute. what are css sprites?. back in the day, sprites were the images in games

Make Your Pixel Art Come To Life! Make video game sprites come to life! How to make a Bead Sprite - . by mariah warfield.