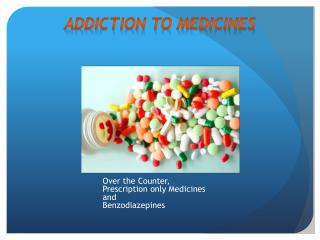 Addiction to Medicines. Over the Counter, Prescription only Medicines and Benzodiazepines. The Rise of Polypharmacy. Four out of five people aged over 75 years take at least one medicine. Addiction to Medicines: - Training and support for gps, pharmacists and other healthcare professionals dr ben riley

Introduction to Medicines Management - . npc definition. “a system of processes and behaviours that determines how

Medicines - . regulation. warning !! this lecture may prove to be boring. the thalidomide disaster. regulatory agencies.

Medicines - . medicines are largely used for their therapeutic effects and the administration of medicines is a key