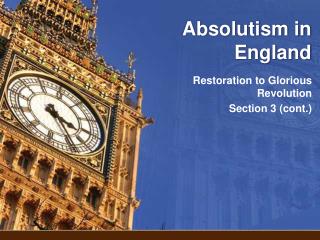 Absolutism in England. Restoration to Glorious Revolution Section 3 (cont.). Life in the 17 th Century: Clothing. At the beginning of the 1600s there was only one word to describe the clothing of the upper classes. STIFF!. Early 17 th Century Clothing: Men. Absolutism – England 16.3 - . the problems in england revolved around power struggles between parliament and the

Absolutism – England 16.3 - . protestants who sought to purify the church of catholic practices. the first stuart

England, Absolutism, and Revolutions - . where’s england?. it’s northwest of mainland europe, but not as far north as

Absolutism Leads to Revolution in England - . charles i. always needed money parliament refused to give him money, so he

The Failure of Absolutism in England - . elizabeth i. died in 1603 with no children, ending the tudor line of monarchs

The Age of Absolutism: Parliament triumphs in England. - James i ruled after queen elizabeth i was the first stuart

Absolutism in Russia - . aim: how did peter the great and catherine the great strengthen russia and expand russia