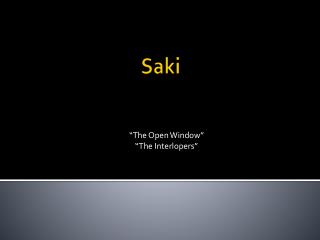 “The Open Window” “ The Interlopers”. Saki. About the author. Saki is a pseudonym, or pen name, used by Hector Hugo Munro. Saki was born in Burma, which is in Southern Asia, but after his mother died, he was sent to live with his aunts in England, and this is where he was educated. “The Interlopers” Saki - . conflict is the struggle between the opposing forces on which the action in a work of

The Interlopers By Saki - . hector hugh munro (1870-1916) was a british novelist and short story writer who wrote under

INTERLOPERS BY SAKI - . bell ringer. identify if you agree or disagree with the statement on the butcher paper on the

INTERLOPERS BY SAKI - . bell ringer. identify if you agree or disagree with the statement on the butcher paper on the

The Open Window Saki - Characters . framton nuttelmrs. sappletonniece/vera three men and a spaniel . what is saki's

The Open Window By: Saki

The Best of Saki

The Interlopers by Saki Engelbert English 9 - . are you stubborn? http://www.youtube.com/watch?v=nvfh0zfwwk0. before we