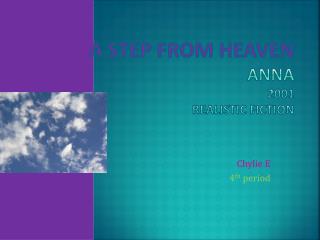 Anna - . romantic heroine – or life force woman?. sophie marceau as anna. anna and levin. like levin, is caught in a

What is the best way to find the truth? - . fiction and nonfiction . fiction a made up story can tell about things that

Author: Lensey Namioka Genre: Realistic Fiction - . big question: how can we understand and appreciate our cultural

step back - Step up . step back. on both sides of the business model. step up?. step back?. how and when ?. how do you

Because of Winn-Dixie - . compiled by terry sams pes. by kate dicamillo illustrated by kevin hawkes visit the author.

Herbie - . rod serling. what type of genre?. science fiction drama teleplay. what is a drama?. it is a play!. what is