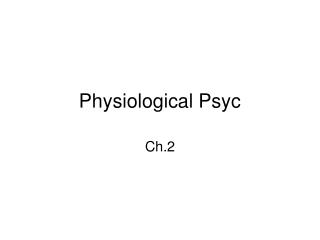 Physiological Psyc. Ch.2. Cells of the Nervous System. The nervous system is composed of two types of cells, neurons and glia . Neurons. Cells which receive and transmit information to other cells. The human brain contains approximately 100 billion neurons. Psyc 2621 - Psychotherapy. the systematic interaction between client/therapist based on psychological principles to bring

Physiological Psychology - . biological rhythms. what is a bio-rhythm?. which of the following diagrams would you

Physio Psyc - . ch.3. sherrington. sherrington deduced the properties of the synapse from his experiments on reflexes (an

Psyc 2618 - Definitions. adolescence is a transition phase between childhood and adulthood.puberty is the beginning of

PSYC 2618 - . the mind and body are closely intertwined.definition of stress: anything that taxes one's personal