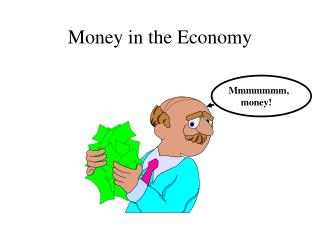 Money in the Economy - . mmmmmmm, money!. monetary policy. a tool of macroeconomic policy under the control of the

Money and finance in the global economy - . the international monetary system is the body of rules and procedures by

Money and Economy - . thus far… evolution of money and banks workings of commodity money determinants of the quantity

Save Money in a Tight Economy - Save more with saveplus today! get latest and updated coupons, deals , offers, coupon

Farmers wanted an increase in the money supply , the amount of money in the national economy. - The money issue. farmers

Money and R eal Economy - . money, bonds, monetary policy, gdp. money and bonds there are many things in the economy cash

In The Money - . vocabulary workshop 5. cal-cu-late (verb) – an action word meaning – to calculate is to work out

Economy in the 1920s - . post-war boom. wages went up unemployment went down “big business in america is producing what

WOMEN IN THE ECONOMY - . introduction cheryl carleton asher villanova university. women in the economy. there have been

WE’RE IN THE MONEY! - . incorporating life skills math through a token economy system of behavior management by mrs.