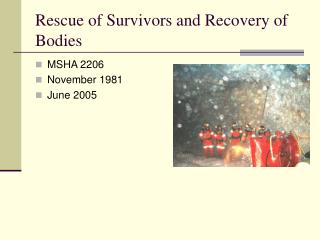 Rescue of Survivors and Recovery of Bodies. MSHA 2206 November 1981 June 2005. Northern Mine Rescue Association. Main Objective. To provide the mine rescue team members with recommended procedures and recovering bodies following a mine disaster. Supportive objectives:. Project Recovery and Rescue - Masala consulting offer project recovery and rescue services to save the project, and

1st Rescue & Recovery - Here at 1st rescue & recovery, we are a fast and reliable breakdown service in

Recovery of Dead Bodies - How to Cope - . one consequence of humanitarian and recovery operations is coming in contact

Bodies of Water - . salt water. oceans contain 97% of the earth’s water the pacific ocean is the largest and the

Bodies of Water - . by mr. hemmert. web of life. oceans cover about 70% of the earth's surface. the oceans contain

Bodies of Water - . identify and locate major bodies of water in the united states explain why many cities in the united

Bodies of Water - . without both freshwater and saltwater, life on this planet would be impossible. water not only

LANDFORMS AND BODIES OF WATER - . an atoll is a ring-like coral island that nearly or entirely encloses a lagoon. it is

Waterways and Bodies of Water - . oceans. the entire body of salt water that covers more than 70% of the earth’s

Bodies of Land and Water - . flashcards. a narrow bay or inlet from the sea bordered by steep cliffs. a raised area of

Landforms and Bodies of Water - . list of highest points of canadian provinces and territories. mount caubvick , the

LANDFORMS AND BODIES OF WATER - . an _______ is a ring-like coral island that nearly or entirely encloses a lagoon. it is

LANDFORMS and BODIES OF WATER - . delta. - land deposited at the mouth of a river. peninsula. - land

Landforms and bodies of water - . shaping our world. land surface and shaded topography. this modis image is based on