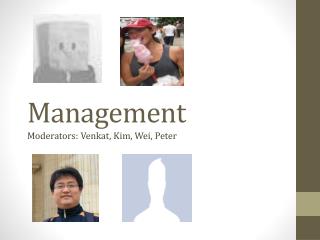 Crisis Management, Reputation Management and Review Management - As a pr team that devotes much of their working time to

Management - . who are managers?. manager someone who works with and through other people by coordinating their work

MANAGEMENT - . the process of deciding how to best use a business’s resources to produce goods and to provide services?

Management - . question: private schools are prohibited in china to emphasize equality in education. true or false?.

Management - . meaning: “management is the process of planning, organizing, directing &amp; controlling for