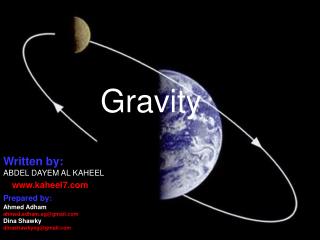 Gravity. Written by: ABDEL DAYEM AL KAHEEL www.kaheel7.com Prepared by: Ahmed Adham ahmed.adham.eg@gmail.com Dina Shawky dinashawkyeg@gmail.com. Our Agenda. In this presentation we will demonstrate the following points: The aim of the presentation. What is gravity? GRAVITY - . a brief timeline of the discovery of gravity. aristotle. 4 th century bc. there is

Gravity - . what makes the world go ‘round…. review: newton’s 3 rd law. properties of gravity. every object with