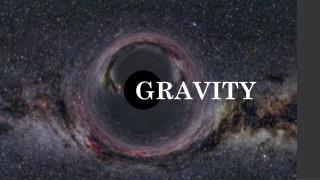 GRAVITY. A Brief Timeline of the Discovery of Gravity. Aristotle. 4 TH Century BC. There is no effect or motion without a cause . The element of earth was thought to be heavy by nature and therefore pulled towards the centre of the (geocentric) universe. Gravity - . what makes the world go ‘round…. review: newton’s 3 rd law. properties of gravity. every object with