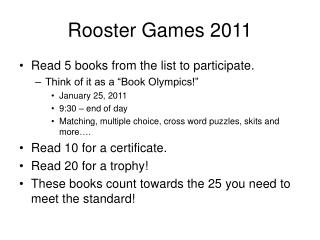 Rooster Games 2014 - . read 5 books from the list to participate. think of it as a “book olympics!” grade 5 january

An Homepage and an Advergame for MMD-Odense - . home page. advergame for mmd-odense. types of games. action games

Rooster Games 2012 - . chariho middle school. illustrations question round. match the picture with the title of the book

Learning Maths Through Games - . 20 th may 2014. why play games?. what educational benefits are there to be gained from

Games and adversarial s earch - . why study games?. games are a traditional hallmark of intelligence games are easy to

At the Big Red Rooster