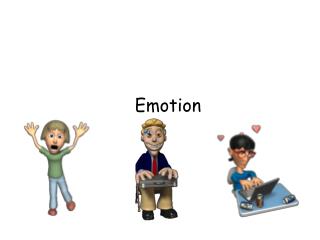 Emotion - The concept of emotion. a complex feeling state marked byphysiological arousalcognitive appraisal of the

Roseman‘s Appraisal Theory of Emotion - . roseman et al. (1996) developed an appraisal theory of emotion that is based

Emotion - . emotion. it is a big concept, not easy to define. drever (1964) emotion involves ‘bodily changes of a

Stress &amp; Emotion June 24, 2014 - . emotion. what is emotion?. as component of personality, decision making not

Media and emotion - . lightly covered terrain. what is emotion?. widel y disputed, so we need to simply choose a position

Emotion and Health - . emotions colorize, energize, and motivate behavior . emotion is “an increase or decrease in

What is the basic emotion? - . anger. rage, being uptight, disgust, being mad, vengeance, fury, resentment, irritation,

Processing Facial Emotion - . darwin (1872) argued that facial expression evolved from expressions in other animals and