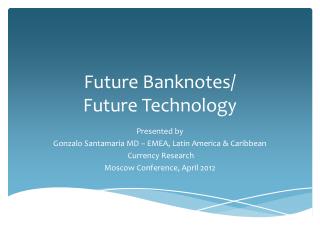 The Future (and Your Future) in Strategic Communications - . fragmented future. digital technology puts power in the

Le Future Proche et Le Future Simple - . the future with ‘ aller ’ = the near future. remember you can talk about

FUTURE WITH GOING TO - . what is the going to tense?. going to  future expresses a conclusion of the immediate future or

The Future of Probability - . p. 263 chapter 6 realidades 3. the future of probability. in spanish, you use the future

Creating the future - . thomas abraham . the most interesting stories are about the future…and the future that is being

BECOMING THE CHURCH OF THE FUTURE - . 2 thessalonians 2. we are all precious for the future planned by god. how should

How do you model the future? - . stochastic approach: the future can be modeled as a distribution over possible events.

Technology and the Future of Pre-K - . toni odom itec 7445 dr. cameron. welcome to the 21 st century. what is a smart

The Future of Medicine - . kim solez, md. the future is already here — it's just not very evenly distributed. - william

Workplace of the Future - . how technology will shape your future. technology has made a huge impact on the workplace and

Technology &amp; Innovation…… The past, the present and the future…..? - . andy button divisional technology