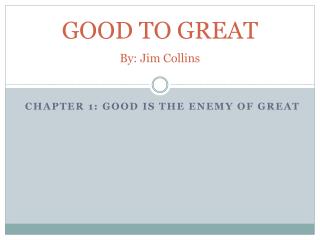 Material Handling at BNL The Past, Present Future - Point to ponder. organizations only improve where the truth is told

Good To Great-Ch. 1 - . marsha swink jonathan mclaurin paul shirley. curiosity. why do some companies make the leap from

Good To Great and the Social Sectors - . jim collins interpreted by dr. rich hawkins. guiding idea. “we need to reject

Good to Great - . why some companies make the leap . . . and others don’t. as jd said in the intro we are going to talk

Good to Great in the Social sectors - . when you compare great companies with good ones, many widely practiced business

Annual Summit Meetings - . “confronting the brutal facts” or preparing for the future: foresight to insight to

A Good Beginning Makes For A Good Ending - . old english proverb. 1. have good people. you can’t have a great program

Good to Great Companies - . picking great companies to build the greatest portfolio and using such techniques to make you